SolarFest House Band An audience favorite since 2009, Individual performers bring to the stage their tasty original music sprinkled with some choice covers. Core members Jim Gilmour, Phil Henry, Jerry Dubeau, Deserie Valerio and Melissa Chesnut-Tangerman are joined by Paul Caroccio on drums, Becca Kodis on fiddle, Cameron Gilmour on sax and Katy Czar on bass. A musical collaborative in the truest sense, the SF House Band always has some surprises up their collective sleeve.

Dar Williams A perennial favorite, she has supported and been with us from the very early days. Dar has been reaching audiences of all ages with her songs, stories and wry humor for more than 20 years. She has performed with legendary folk artists and is now a luminary herself; she has recorded 20 CDs, is a children’s book author and teacher at Wesleyan University. “I’ve made choices about how I lived my life, outside of the world that was going to fit me among the mainstream norms, and I chose to stay with my friends, to stay with my culture. That turns out to have been the sturdiest structure I could have built for myself. And that’s in my songs, it’s in my teaching. I’m a believer in what can happen when we make music together.” 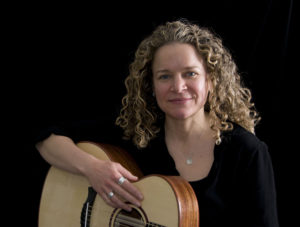 Lara Herscovitch Winner of SolarFest’s 2011 Singer-Songwriter showcase, Lara Herscovitch’s music is an original blend of modern folk with blues, jazz, and pop influences. With her voice “clear and smooth like expensive liquor,” she stands “above and beyond the pack.” Former Connecticut State Troubadour, Lara brings a charm, authenticity, and love of performing that immediately resonates with diverse audiences. She has appeared as a guest on A Prairie Home Companion and tours from Maine to Miami. She also has extensive experience as a policy social worker, and has worked in the US, Latin America and Asia on behalf of disadvantaged individuals – focusing on education, community development, and juvenile justice. Echoes of these themes resonate throughout her music. 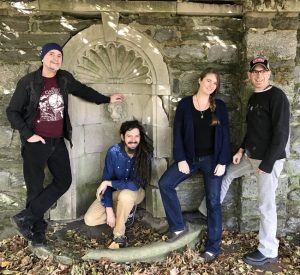 The Gaslight Tinkers’ blend of global rhythms creates a joyously danceable sound around a core of traditional New England old time and Celtic fiddle music, merging boundless positive energy with melody and song. Since forming in 2012 the band has lit up the East Coast, the West Coast, and the Caribbean, headlining clubs, dances, and major festivals. Playing what The Valley Advocate describes as “Music that consistently fizzes and pops with unexpected textures and turns,” the sound and energy of Audrey, Jopey, Garrett, and Peter are universally irresistible. 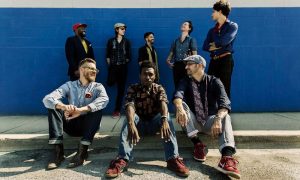 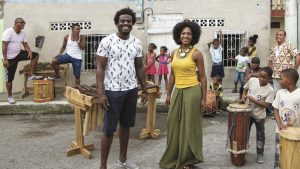 Rio Mira is an exciting recording collaboration between artists from neighboring Ecuador and Colombia. Fronted by singer Karla Kanora, the marimba-centered supergroup highlights the music and poetry of their countries’ El Pacífico region. Their debut album is guided by the distinctive percussive tones of the marimba, an all-important ingredient of this socially conscious project.

Freddi Shehadi can take you from soaring, intense passages to soft intimate interludes, weaving together a rich spectrum of musical tapestry. He loves to capture the energy of a performance from spontaneity, working with a very talented and diverse group of musicians. He has worked with artists and music industry greats as diverse as José Feliciano, Debbie Harry, L.A Reid, Martin Sexton and a host of others.

Mowgli Giannitti is an active and diverse artist, trained in jazz and classical practice and theory, currently working with musicians whose careers span the globe and industry, and engaged in an extreme range of styles and sounds including Opera, Jazz, Jam Rock, Contemporary Classical, Folk, Funk, Bluegrass, Old-Time, Celtic, Latin, and Free Jazz.

Calling to mind the soulful, dynamic sounds of 70’s giants such as Led Zeppelin, Humble Pie, and Free’s early years, Wild Adriatic has won early acclaim from places such as Rolling Stone, USA Today, Relix, American Songwriter, and Guitar World. The debut album Big Suspicious was released in January 2014 and the band has since stayed on the road in support of the effort, logging an impressive 175 live shows in 2014 alone. The band has built a strong following off of a relentless tour schedule and a powerhouse live show, spending 225+ days on the road and making noteworthy appearances at festivals like SXSW, moe.down, Gathering of the Vibes, and CMJ. 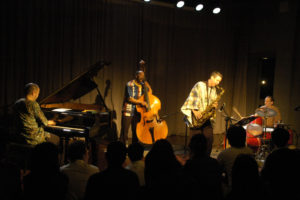 blood drum spirit Bringing a new global vision to music, and exploring deep into the world’s great traditions through the prism of live jazz performance, the ensemble has lived, played and toured throughout Africa, the Middle East, Europe, the Americas, and Asia, including four tours of China as featured ensemble at the renowned Beijing Midi Jazz Festival. Percussionist royal hartigan has performed with Kenny Barron and Rudresh Mahanthappa; bassist Wes Brown has toured with Earl “Fatha” Hines and Ed Blackwell; pianist Art Hirahara has played with Akira Tana and Rufus Reid; and saxophonist David Bindman has performed with Wadada Leo Smith and Anthony Braxton. 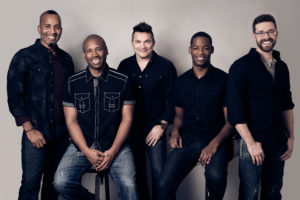 Hailing from San Francisco, they are the original “rock band without instruments.” Using nothing more than their five voices (and mouths, and sometimes bodies), they deliver everything from blistering funk to screaming rock to heart-melting ballads. Over the past 25 years the group has become an institution claiming nearly 20 superb vocalists and performers in their alumni ranks, including Garth Kravits, Troy Horne, Kid Beyond, John Pointer, Nick Girard, Austin Willacy, Roopak Abuja, Jake Moulton and many others. These pioneering musicians have performed thousands of shows and have shared the stage with some of the biggest names in music. The House Jacks thrilled SolarFest audiences in 2007 and 2009. 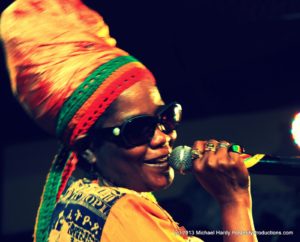 Sister Carol Born Carol Theresa East, in Kingston Jamaica she is also known as the “Black Cinderella” and “Mother Culture.” She is a Grammy nominated singer, DJ, songwriter, actress, entrepreneur, educator and humanitarian. She is undoubtedly one of the most talented, hardest working reggae artists out there. She has been working the front line for over thirty years. Sister Carol’s music is rich with cultural values and social consciousness. Over the years she has been a top featured artist on many festivals. Sister Carol is exceptionally talented on the mic and she is also mindful of the importance of her influence as an example to her listeners. She stands as a singer upholding love, truth and rights. Her music career has produced twelve albums, continuous tours and spot dates and numerous network television appearances. Her message deeply resonates with those of SolarFest! 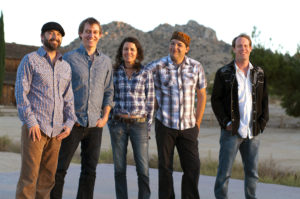 Donna the Buffalo One of the most dynamic and determined bands continuously touring America since 1989, their distinctive, groove-heavy, and danceable music is accessible, positive, and memorable. Donna’s music often contains social and moral responsibility as core beliefs, and they are just simply fun to get out and celebrate life with. We are honored that Donna the Buffalo has chosen SolarFest as their only stop in Vermont on this summer, and are delighted to have their energy and creativity.

Connor Garvey An award-winning singer-songwriter from Portland, Maine, with the presence of an entertainer, the lyrical depth of a poet, and the enchantment of a storyteller. Garvey leaves audiences uplifted and inspired through a positive message that proves you can be optimistic and self-aware without being boring. His unique sandy tenor and masterful blend of rhythm and melody draw comparison to Paul Simon and contemporaries Josh Ritter and Jason Mraz.  Listeners often are drawn to Garvey’s engaging performance style, accomplished musicianship, and memorable melodies; his lyrics project a depth and sincerity that allow the observant listener to find meaning beyond the catchy hook. The themes of community and living with intention run deep for Garvey. He wins song competitions. He fills rooms. But most of all he moves people. 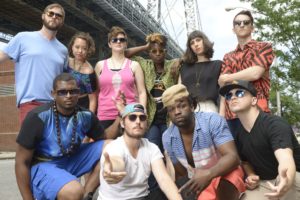 Pitchblak Brass Band Hip Hop music has always been unafraid to push boundaries. Perhaps because it simultaneously came from nothing yet came from everything, the genre stands alone in how creatively outside influences can be incorporated into its musical mix. PitchBlak Brass Band uses the epic sounds of tubas, trombones, saxophones and other typically non-hip hop instruments in the spirit of The Roots and some of rap’s iconic live bands, to deliver an energy that samples, loops and breakbeats can’t always capture. 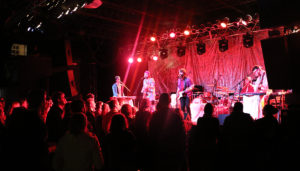 One of Vermont’s hottest new bands, Madaila’s tight arrangements, vocal skill, and multi-instrumental performances showcase musical minds at work. Tight spandex and technicolor attire showcase a different side. Playing live, both powerful and playful elements of Madaila are present as the 5-piece finds the deeper possibilities within their concise recorded material.  When the pop juggernaut is on stage, spontaneous expression and contagious melody coexist. Madaila has shared the stage with The Flaming Lips, Mac DeMarco, Grace Potter, Delicate Steve, Valerie June, Rubblebucket, Slow Magic, and is part of Future Fields, an artist-run, musical creation and amplification group based in Burlington, Vermont. This is their SolarFest debut! 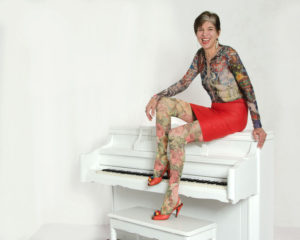 Marcia Ball This Texas-born, Louisiana-raised musical storyteller and songwriter has earned worldwide fame for her ability to ignite a full- scale roadhouse rhythm and blues party every time she strolls onto the stage. Her groove-laden New Orleans boogie, deeply soulful ballads and rollicking Gulf Coast blues have made her a one-of-a-kind favorite with music fans all over the world. In 2010, she was inducted into the Gulf Coast Hall Of Fame and in 2012 into the Louisiana Music Hall of Fame. She’s received a total of six Living Blues Awards, nine Blues Music Awards, and five Grammy Award nominations.